Incorporation of PPI-G2 (without Na-DFC) into QG mesophase led to a decrease of 78 Å in the lattice parameter. Solubilization of higher PPI generations, G3 and G4, led to increases in the lattice parameter to 57 Å and 64 Å, respectively. At 25 wt%, each of the dendrimers caused a phase transition QG → reverse hexagonal (HII). According to ATR-FTIR and DSC, the large lattice parameter values of G3 and G4 (relative to G2) embedment were assigned to their interactions with the carboxyl groups of GMO at the interface in comparison to the strong interaction of PPI-G2 with the water.

Cosolubilization of Na-DFC with PPI-G2 revealed enlargement of the lattice parameter (of the new HII mesophase), while in the case of G3 and G4 systems no significant influence was seen with Na-DFC.

The release of Na-DFC from QG and HII systems was followed by UV–vis spectroscopy and revealed generation-dependence on drug release. As dendrimer generation increased, the cumulative drug release decreased. 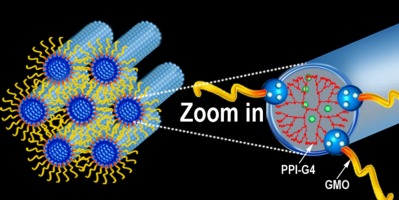