It is shown that phospholipid dispersions with a few percent of diacylphosphocholine PC in water can be swollen to single-phase lyotropic liquid crystalline Lα-phases by the addition of co-solvents like glycerol, 1,3-butyleneglycol BG or 1,2-propyleneglycol PG. The birefringent Lα-phases contain small unilamellar and multilamellar vesicles if the temperature of the samples is above the Krafft-Temperature Tm of the phospholipid. When such transparent birefringent viscous samples are cooled down below Tm the samples are transformed into birefringent gels. Cryo-TEM and FF-TEM measurements show that the bilayers of the vesicles are transformed from the liquid to the crystalline state during the transformation while the vesicle structure remains. The bilayers of the crystalline vesicles form adhesive contacts in the gel. Pulsed-field gradient NMR measurements show that two different kinds of water or co-solvent can be distinguished in the gels. One type of solvent molecules can diffuse like normal solvent in a continuous bulk phase. A second type of water diffuses much more slowly. This type of solvent is obviously trapped in the vesicles. The permeability of the crystalline vesicles for water and solvent molecules is much lower in the crystalline state than in the fluid state.

Oscillating rheological measurements show that the gels with only 1% of phospholipids can have a storage modulus of 1000 Pa. The gels are very brittle. They break when they are deformed by a few percent. 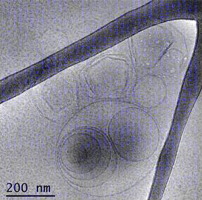